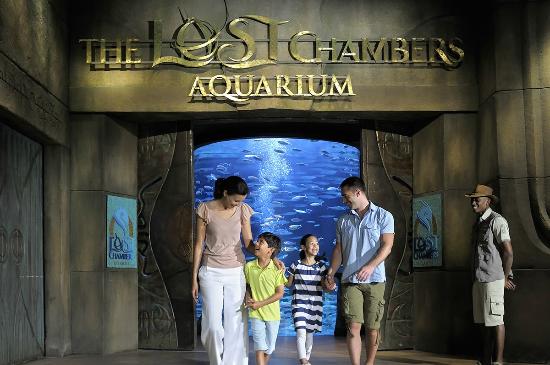 The lost chambers at Atlantis-Imagine exploring the mysterious ruins of Atlantis, lost for thousands of years deep beneath the sea. Now picture yourself being surrounded by 65,000 marine animals. Come live out your own Atlantean adventure at The Lost Chambers Aquarium. Explore the underwater mazes and tunnels of this lost civilization while encountering sharks, eels, seahorses, and piranhas. There are over 20 remarkable marine life exhibits in this Dubai aquarium including a touch tank and our interactive Aquatheatre show.

Atlantis is home to 65,000 marine animals

During the construction of the resort, a complex series of passages were uncovered, thought to have been buried for thousands of years by the waters of the Arabian Gulf. Upon further investigation, an ancient street system was discovered and the theory came into being that these were in fact remains of the Lost City of Atlantis.

Such an exciting discovery has raised many questions about Atlantean civilization and culture, some of which will never be answered. However, it seems that this network of streets has revealed artifacts from a very civilized people who possessed an incredible level of technology.

The Lost Chambers Aquarium gives a valuable insight into the Atlantean history and function attached to each room, as well as information about the marine life now living there. Our map takes you through a gateway into a magnificent underwater realm where you can ask our Marine Educator for any further information about Atlantis and its inhabitants.

Our friendly Marine Educators invite you on a guided tour of  The lost chambers at Atlantis Aquarium, scheduled hourly throughout the day. These interactive tours give further insights into the legend of Atlantis, traditions of the Seven Sages and amazing facts about the marine life that inhabits the Dubai aquarium.

Have fun with our divers during this interactive, educational and entertaining show in the Seven Sage Chamber. Learn more about our diving team and see how they communicate beneath the waves.

Come see a true feeding frenzy in our magnificent Ambassador Lagoon. You will come face to face with hundreds of indigenous marine animals from the Arabian Gulf as they are being fed by our divers.

Atlantis the palm | Places to Visit in Dubai