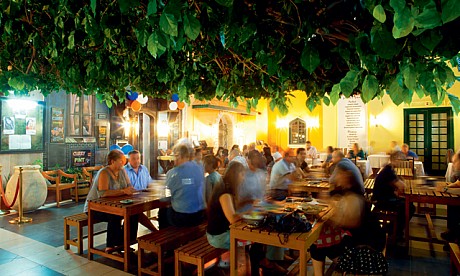 Welcome to The Captain’s Arms.One of the city’s favourite traditional English pubs, Captain’s Arms serves the most relished beverages and conventional English food to go along. You may enjoy indoor seating or the terrace overlooking the verdant Centre Garden.

The Captain’s Arms is somewhat legendary in Abu Dhabi. Providing a haven for homesick expats while serving a wide range of beverages and good old-fashioned stodgy pub grub this bolthole is more than deserving of its place in the capital’s folklore. Don’t get us wrong, if it’s dynamic, palate quivering originality you’re after then we suggest you look elsewhere. However, if you want something to fill your belly in an atmosphere accurately reminiscent of an English pub then this is the place to go.

The wood panelling and low ceiling coupled with the traditional draught taps all add to an experience many expats will recognise – even the slightly surly service is pretty authentic. We’re here for the food (although it should be pointed out the beverage and blends list is incredibly extensive) though and the menu doesn’t disappoint. In a city drowning in fine dining sometimes all a person needs is some cheesy chips. They’ve also got stacks of classic mains like Irish lamb stew, sausage and mash, lamb shank or even some pizza, burgers or soup.

Presented in a huge brown paper cone the succulent, crispy, lightly battered cod was delicious, as were the fluffy, thick cut homemade fries and mushy peas. The cod (that’s right, cod – none of your hammour here thank you very much) in particular was served piping hot and broke apart nicely to release a rich, tender aroma. The portions are plentiful, so by the end you’ll be feeling well and truly full. We also sampled the steak pie which was another triumph. The steak cubes were moist and full of flavour while the pastry shell dissolved in the mouth. The braising jus was also ridiculously moreish although the chips served with the pie had certainly seen better days – but these were minor quibbles. So much so we couldn’t resist delving into the dessert menu to check out what traditional treats were in store.

The desserts are limited, to say the least, but when it’s made up of classics like trifle, apple crumble and Irish cheesecake you’ll not find team TOAD complaining. The sugar on the crumble glistened like little diamonds and while the dessert itself hit our belly with a bit of a thud it was delicious and on another day we could have eaten another. The cheesecake was thick, creamy and delectable. To be fair they’ve used a little bit of culinary licence by referring to it as an ‘Irish’ cheesecake when the main flavour is lemon and lime, but again this isn’t about fine dining.

Overall, we can heartily recommend the Captain’s Arms. Whatever you’ve heard about it is probably true and as far as pub food goes you’ll be hard pressed to find a better candidate to fill these chilly winter evenings. Do yourself a favour and pop along with some friends, sit yourself down and indulge in earthy good old-fashioned, traditional British cuisine. A real gem and no mistake.