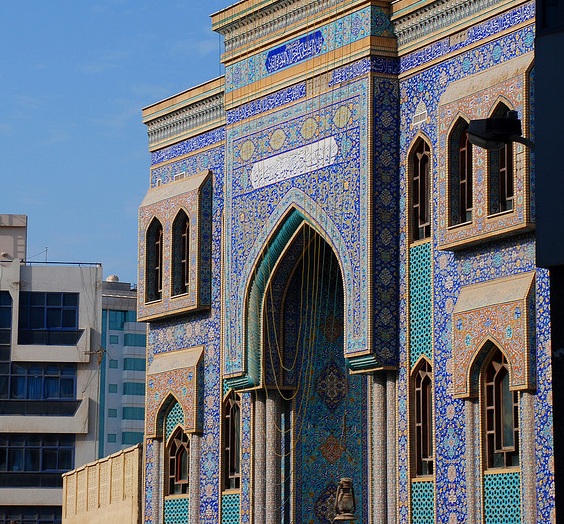 Iranian Mosque Dubai, originally referred to as Imam Hussein Mosque, is one of the hidden jewels in the emirate. The UAE’s only Iranian mosque, Iranian Mosque Dubai  is an intricately designed structure that reflects Persian architectural style. Contrary to most other Dubai’s mosques that have plain, simple exteriors, this mosque boasts of a highly decorative façade. A striking characteristic of its outer walls is azure blue colored faience tiles embellished with intricate floral motifs as well as curvilinear twirls in a riot of colors like red, green, yellow, and white.

Located on the Al Wasl Street, next to Iranian Hospital, in Jumeirah, Iranian Mosque Dubai  sprawls over an area of about 2,500 square meters. Built with the support of Iranian Red Crescent, it comprises several interior halls, along with an office section and guest-house. Highlights also include a library that provides a repertoire of about 14,000 books of diverse topics and languages including Arabic, English, Urdu, and Persian. In addition to serving as a prominent place of worship for Shia sect of Muslims, the mosque is also a venue for a plethora of religious and cultural activities.

Iranian Mosque Dubai  is one of the largest and most attractive in the city. Built in quasi-Fatimid (Egyptian) style, it’s reminiscent in appearance, if not quite in size, of the great mosques of Cairo, with a pair of soaring minarets, a roofline embellished with delicately carved miniature domes and richly decorated windows set in elaborate rectangular recesses. As with many of Dubai’s more venerable-looking buildings though, medieval appearances are deceptive – the mosque was actually built in 1979.

It also has the added attraction of being the only mosque in Dubai that non-Muslims can visit, owing to the four weekly tours run by the Sheikh Mohammed Centre for Cultural Understanding (SMCCU). These offer a good opportunity to get a look at the mosque’s rather chintzy interior, with its distinctive green-and-orange colour scheme and delicately painted arches. The real draw, however, are the entertaining and informative guides, who explain some of the basic precepts and practices of Islam before throwing the floor open for questions – a rare chance to settle some of those perplexing local conundrums, whether it be a description of the workings of the Islamic calendar or an explanation of exactly what Emirati men wear under their robes.